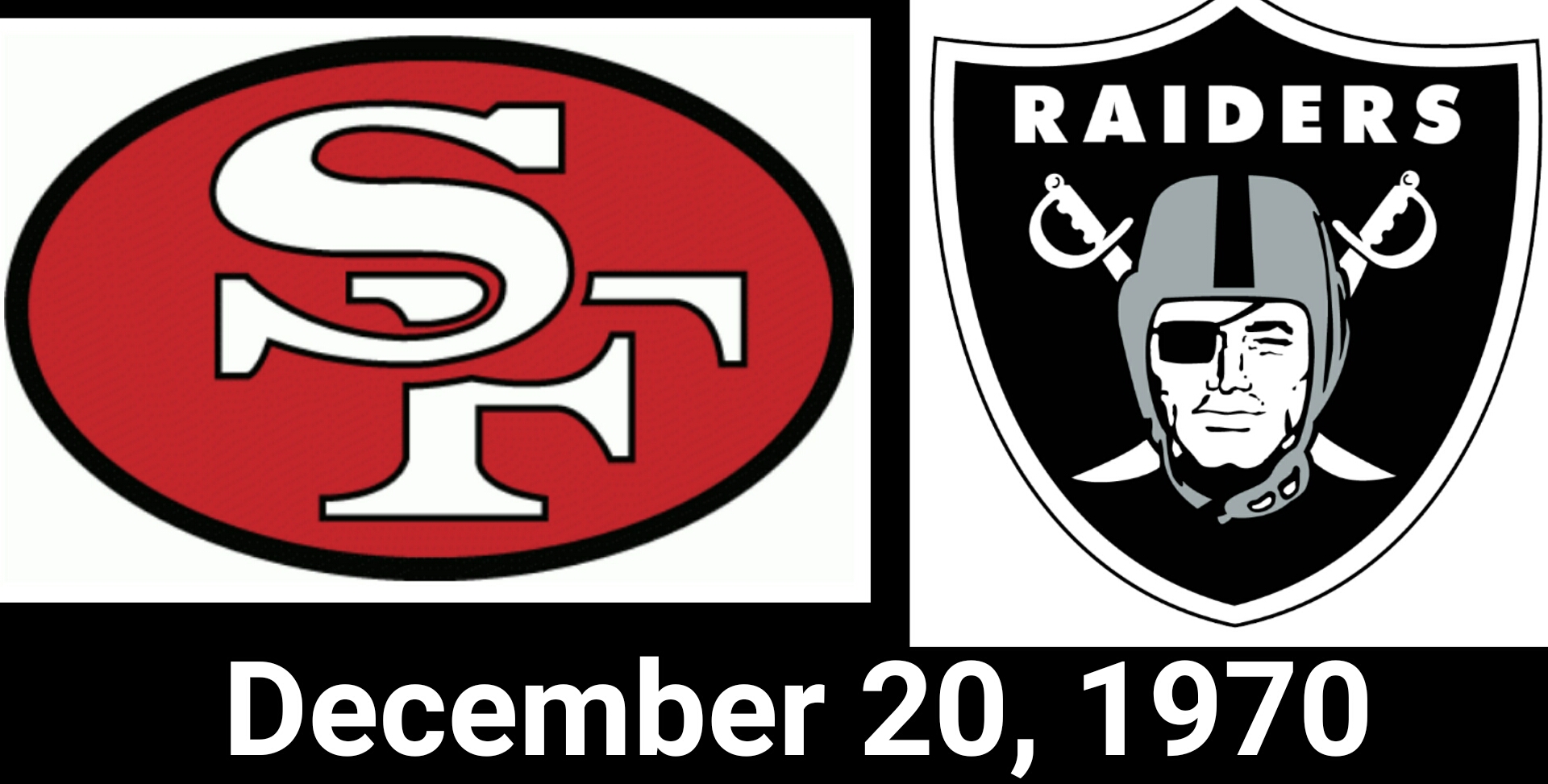 Friends, let’s face it, 2020 has been a shit show on so many levels. COVID-19 has tragically left over 300,000 of our fellow Americans dead and the body-count goes higher daily.  Our economy is teetering on the precipice of total collapse for many people and businesses. Our beloved Niners have had a buzzard’s luck season with more devastating injuries that no NFL football team could withstand.  Our Niners season is SO – 2020!

Why don’t we roll back the clock to sweeter days? Let’s go back exactly 50 years to Sunday, December 20, 1970. It was the final weekend of the first year of the NFL-AFL merger.  The 49ers were in first place in the new NFC West Division by a game over the Los Angeles Rams. 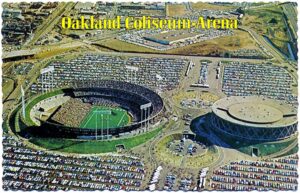 The 49ers were playing their cross bay rival Oakland Raiders at the Oakland-Alameda County Coliseum in their first official league game. The Raiders held a 3 to 1 edge in exhibition games between the Bay Bridge rivals. The Raiders were already in the playoffs for the fourth straight year on the strength of their victory over their bitter historic AFL rival and defending Super Bowl champion Kansas City Chiefs the previous weekend.

In contrast, the Niners needed a victory if the Rams won against the New York Giants in an early game that day. As the 49ers took the field the Rams score was on display on the Coliseum scoreboard, Rams 31 Giants 3, there wouldn’t be any backing into the playoffs for the 49ers! They’d have to beat the formidable Raiders to make Pete Rozelle’s post season party.

The weather was rainy and cold. The 49ers took a 3 point lead midway through the first quarter on a 42 field goal by Bruce Gossett. The Raiders took the lead 7-3 with a 29 TD pass from Daryl Lamonica to impressive rookie tight end Raymond Chester. It appeared it would be a muddy slugfest, but the Raiders never scored again! The 49ers reeled off 35 unanswered points!

NFL 1970 MVP, John Brodie threw three TD passes to; 26 yards to tight end Ted Kwalick, 34 yards to Gene Washington and 28 yards to Bill Tucker. Add in a 36 yard pick six by Hall of Fame cornerback, Jimmy Johnson and a 1 yard TD run from Ken Willard, and you get a final 38-7 score.

A majority of the 54,535 mostly-partisan Raiders fans were long gone to drier warmer spots, like their favorite watering holes, by the final gun. The game was historic on two fronts; it was the first meeting of the cross-bay rivals in an official game and it was the 49ers first title of any kind in their 25 year history.

The Raiders out gained the 49ers, 358 yards to 296 and had more first downs, 17 to 16. So why was the score so lopsided?  Turnovers of course, the Raiders coughed it up nine times, five interceptions and four lost fumbles versus the Niners turnover free performance   Of note, Raiders rookie quarterback Kenny Stabler and future football Hall of Famer made his NFL debut at quarterback during the game.  It was not an impressive debut, The Snake completed two of seven for 52 yards, no TDs, but got picked off once.

The Niners had come, oh so, close to a title in 1957! That season they had tied with the Detroit Lions at a 8-4 record in the Western Division of the NFL. There was no such thing as a “wild card” then, so the Lions came to Kezar Stadium to take on the 49ers for the NFL Western Division title.  After jumping out to a huge, seemingly insurmountable, lead the 49ers lost 31-27. 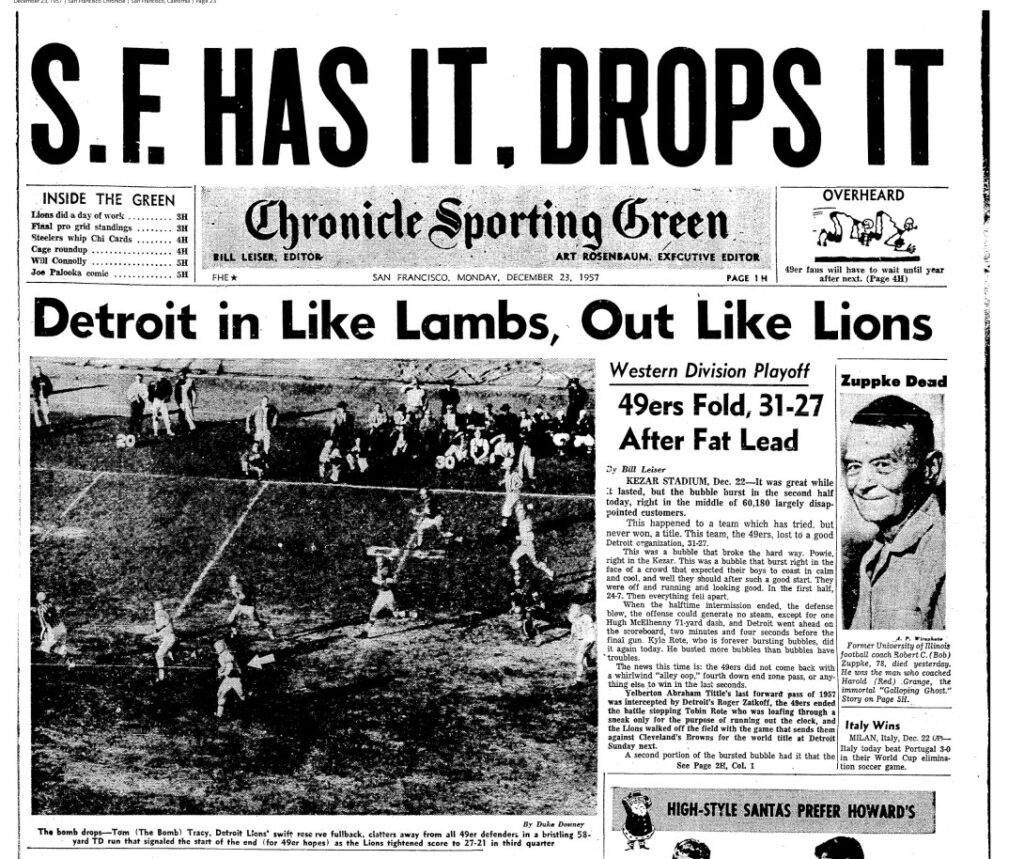 In that 1957 playoff game the score at halftime was 24-7 49ers. In an eerie similarity for old-timers the halftime score of the 1970 win-or-go-home game for the Niners was … 24-7! There was one “old-timer” playing quarterback for the 49ers in the 1970 game that remembered the 1957 game, John Brodie.  Brodie, or JB, was a raw rookie out of Stanford in 1957. “I couldn’t help to look back and recall the score was the same,” Brodie said, “But! I had a different feeling this time. I guess you learn from past failures. I knew we’d win.”

Here’s some quotes from the winning and losing locker rooms.

“No secret plays, no dipsy doodle, just plain old fashioned hitting to get the job done,” said 49ers head coach Dick Nolan happily, “You can’t really point to one single man as the star of the game. It’s been that way for the last three games, since we lost to the Rams. These men knew what had to be done and went out and did It.”

“I don’t think the L.A. result made a difference,” said a happy Niners fullback Ken Willard, “We’ve been working toward winning this game all week. We took the game to them. We were ready. Were they?”

“Hell, these guys haven’t been on a championship team since high school or college,” quipped an elated John Brodie. But, Brodie wasn’t looking ahead, not yet. “Let me savor this one, it took 14 years to get it,” said the 35 year-old quarterback. “This is my first title since my high school days at Oakland Tech. I’m not going to worry about Minnesota until we resume practice.”

“When your club wins, that has to be the highlight of your career,” he said. “That’s what it’s all about. When we can beat them as well as we did, it has to be a great day. It’s beautiful to win a game you have to win. To beat them gives us a big lift.  The fans in San Francisco deserve it, too. They gave us support, all 150 of them who got in. At the gun, I looked up in the stands and our fans were still there cheering. I couldn’t see any of theirs.”

“The Raiders are a great team, or they wouldn’t have won as they’ve won in the past,” he said. “The score in this game won’t hurt us any, but it doesn’t relate to next week, either. We have a big hurdle ahead.”

Brodie tried to explain how the 49ers did it, “Our guys came up with the big plays, the kind you have to have in a game like this. We had five interceptions and four fumble recoveries yet it was still anybody’s game up to the time (Bill) Tucker caught the touchdown pass to make it 31-7.  We didn’t sit and look at the scoreboard in the third quarter. We knew we needed more points so we kept throwing.”

The pass to Tucker came on a third-and-one situation at the Oakland 28 in the opening minutes of the fourth quarter.  Brodie faked a handoff to fullback Ken Willard diving into the line and dropped back to hit his unguarded halfback at about the 15. The Raiders were fooled up front and flatfooted in the secondary, frozen in place by the play fake. “It doesn’t take a genius to call that play,” said Brodie, “They were down 17 points and had to stop us from making another first down. They had to look for the run.”

Otherwise, he said, the 49ers played it straight. “We didn’t get fancy. Heck, we stuck with the same running plays. We used only four different rushing plays in the first half and just two in the second half. We did keep trying to pass but the field was so sloppy, the ball felt like a watermelon. It was slipping out of my hand. With a field like that, if you get behind it’s tough to throw. That’s what happened to Oakland.”

Brodie completed just 7 of 21 passes, a mediocre 33 per cent compared to his season average of 60 per cent, but he hit his receivers in the clutch. He threw beautiful bullseye touchdowns to Ted Kwalick and Gene Washington.  “Those were great catches,” he said, “There’s not a lot of advantage to a wet field but catches like Ted and Gene made early put us ahead and that gave us a big advantage.”

Kwalick was Brodie’s favorite target, which is a new wrinkle in the 49er offense. John said he wasn’t trying to pick on any Oakland secondary weakness.  “We didn’t go after any defensive back,” he said, “That’s tough to do. We did try to stay away from Dave Grayson. That’s tough to do, too. You know you’ll never complete a bunch against Oakland. You just try to keep the ball away from them. The Raiders play one-on-one and look for the interception with their free safety. You have to try to keep the ball away from him. The catch Kwalick made to put us ahead 10-7 got Grayson out of the center of the field. There’s not a lot of secrets to beating their style above execution. You have to execute on those guys, you just don’t leave anything to chance.”

Second-year Raiders head coach John Madden sat down to play Meet the Press with the pencil pilots. “I know the question is going to be if we were up or down. I’ll tell you nobody wanted those fumbles and interceptions. I’m sure the players were ready for the game. We played poorly. You can’t give a team like that as many breaks and balls and then expect to be in the game, But, in no way do I want that to sound like an excuse. The 49ers knew what they had to do and they went out and did it. I think they should get the credit,” he said.

Here’s how 49ers 1970 Len Eshmont Award winner free safety Rosey Taylor described the new found 49ers team chemistry,  “And Frank Nunley started to get fired up. When I first came here last year Frank would just call the defense and go to the line. But, at the end of last year he started getting excited and this year he’s really been fired up.”  Taylor said the 49ers have always had the talent to win, “I never saw a team with so much talent, lose so many games,” he declared. “These guys have always had the talent, but apparently they never had the leader or that certain something it took.  Everybody had to contribute to make this happen. I don’t want to make it sound like it was all because of me, and please don’t write it that way.”

“I’ve been waiting for this day since Monday night (when the Rams lost on TV). We couldn’t get on the field fast enough,” said 49ers guard Woody Peoples. Peoples assisted in setting a new NFL record for fewest sacks to a quarterback in one season: eight. “A record like that it’s just beautiful,” he said.

The 49ers did something they hadn’t done all year, use the tight end, in this case Ted Kwalick, as a deep threat. “We figured we had to go to the tight end, because against the bump-and-run you either get a long gain or you get nothing,” said Gene Washjngton, who, like Kwalick, made fine touchdown catches of perfect Brodie passes against strong coverage. Washington, whose in-laws are Raider season ticket holders, said, “I’m sure they’re happy, they’re in the playoffs. Heck, they don’t need me.”  But John Brodie does.

Here’s a NFL Films video of the highlights of the game.

The following Sunday the 49ers had to face the defending NFL, remember it was the first year of the merger, champions the Minnesota Vikings on the frozen tundra in Minneapolis. I’ll be writing about the 50th anniversary of that game next Sunday.