Recently a SABR friend of mine forwarded an email to me with the question, were the two 1971 trades involving Frank Duffy the worst trades in San Francisco Giants history?  For younger fans of the Giants, Frank Duffy was a good-field, light-hitting shortstop that had a very mediocre MLB career.  In 1971 he was involved in two bad trades, from the Giants viewpoint. I decided to share my long detailed reply to that email with readers of this blog.

Of course, the worst trade in San Francisco Giants history is the Orlando Cepeda for Ray Sadecki trade. I respectfully disagree with Steve Treder that the Giants painting themselves into a corner on that trade was the primary reason for the trade.  New Giants manager Herman Franks, an Alvin Dark disciple, old teammate and coach under Dark, thought Cepeda had malingered in 1965 due to his knee injury. Cepeda’s issues with Dark are well known and influenced Franks’ opinion of Orlando, much to the Giants detriment.

Before the season of 1966 Cepeda had successful knee surgery on his right knee. However, on the strength of his outstanding season in 1965 McCovey was firmly entrenched at first base. The trade on May 8th was motivated by two primary factors: Franks’ and Feeney’s doubt about Cepeda’s durability if they moved him to leftfield and the Giants front office’s constant search for a winning lefty to recreate Billy Pierce’s great success in the pennant winning season of 1962, especially at Candlestick Park where Pierce won 12 straight without a loss.  The logjam at first base was less of a factor in my opinion.

In the Giants defense, it must be remembered that Ray Sadecki was off to a great start in 1966. His ERA at the time of the trade was a sparkling 2.22. Sadecki had won 20 games for the Cardinals World Series Champion team in 1964. After a disastrous 1965 season it appeared he was back in fine winning form. Personally, Cepeda was one of my all-time Giants favorite players and I cried when I found out he’d been dealt. At the time of the trade in 1966 I was a 13 year-old kid that literally lived and breathed baseball baseball baseball! 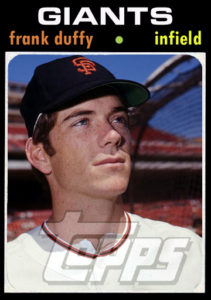 Back to those disastrous Frank Duffy trades. The initial trade on May 29, 1971 that sent promising rookie outfielder George Foster to Reds was very badly received in the clubhouse by the Giants veterans. Duffy was a local kid that the Giants highly prized when he stared at shortstop for Stanford. The Giants had wanted to draft him with their first round number 16 draft pick in June secondary draft of 1967. However, the Reds snagged him with their number 6 pick in the first round.

The Giants veterans were prescient in knowing the team didn’t need a slick fielding shortstop with little power. They had rookie sensation Chris Speier from Alameda at short when they made the Duffy trade. Count me as one of those dumbfounded by the trade!

Of course, we know George Foster went on to be a key cog in the Big Red Machine of the 1970’s. Foster reached the pinnacle in 1977 when he was the NL MVP on the basis of his league-leading 52 home runs and 149 RBI’s. Foster finished his career with 348 home runs and a more than respectable WAR of 44.2. That’s in stark contrast to Duffy’s career HR total of 26 and WAR of 10.4!

Later in 1971 the Giants added insult to injury by shipping Duffy along with future Hall of Famer Gaylord Perry to Cleveland for hard-throwing lefthander Sudden Sam McDowell. That trade ranks right up there with the Cepeda for Sadecki trade by the numbers, if not emotionally. Again, like the Sadecki trade five years before, the Giants’ desire to recapture the Billy Pierce 1962 lefty Candlestick magic was a train wreck!

Perry immediately paid dividends to the Indians by winning the 1972 AL Cy Young. Meanwhile, Duffy settled in as Cleveland’s starting shortstop for six years as a good-field light-hitting regular. Perry went on the capture the NL Cy Young award in 1978 while with the Padres on his way to 314 wins and enshrinement in Cooperstown in 1991. His 1978 feat of winning the NL Cy Young award was the first time a pitcher had won the Cy Young award in both leagues. Sudden Sam McDowell was an unmitigated failure with the Giants!

Better known by being a regular drinking buddy of Giants owner Horace Stoneham than his pitching, the less said about McDowell’s brief tenure in San Francisco the better. The Giants sold him to the Yankees in June 1973 as Stoneham struggled financially to keep his head above water.  Two years later Sudden Sam was out of baseball at age 32. On a personal note, on my first trip to The Stick to see McDowell pitch in 1972 I was horrified to see he was wearing Perry’s, now permanently retired, number 36! Later in the season he went back to his Cleveland number 48.

While the numbers might indicate the Perry/Duffy for McDowell trade was worse, I feel strongly that the Cepeda for Sadecki trade was the worst in San Francisco Giants history emotionally. Cepeda was an original San Francisco Giant when they moved here in 1958 and broke in sensationally by winning the NL Rookie of the Year award unanimously. San Francisco loved the Baby Bull and hence the gut-wrenching shock of his being traded.

The two Frank Duffy trades were definitely gross blunders by a clueless Horace Stoneham who missed Chub Feeney’s baseball wisdom badly. Charles Chub Feeney, the longtime Giants GM, was named NL president before the 1970 season, and Stoneham took over the GM duties for his remaining six seasons of his Giants ownership. The Frank Duffy trades, if taken in combination, were on balance definitely the worst trade parlay in San Francisco Giants history.