Today is the 60th anniversary of a remarkable Giants walk-off drama in the history of the San Francisco franchise. On May 26, 1959 the Giants were finishing off a five-game away and home series with their historic rival Dodgers at Seals Stadium. The long-standing rivals had split the previous four contests. 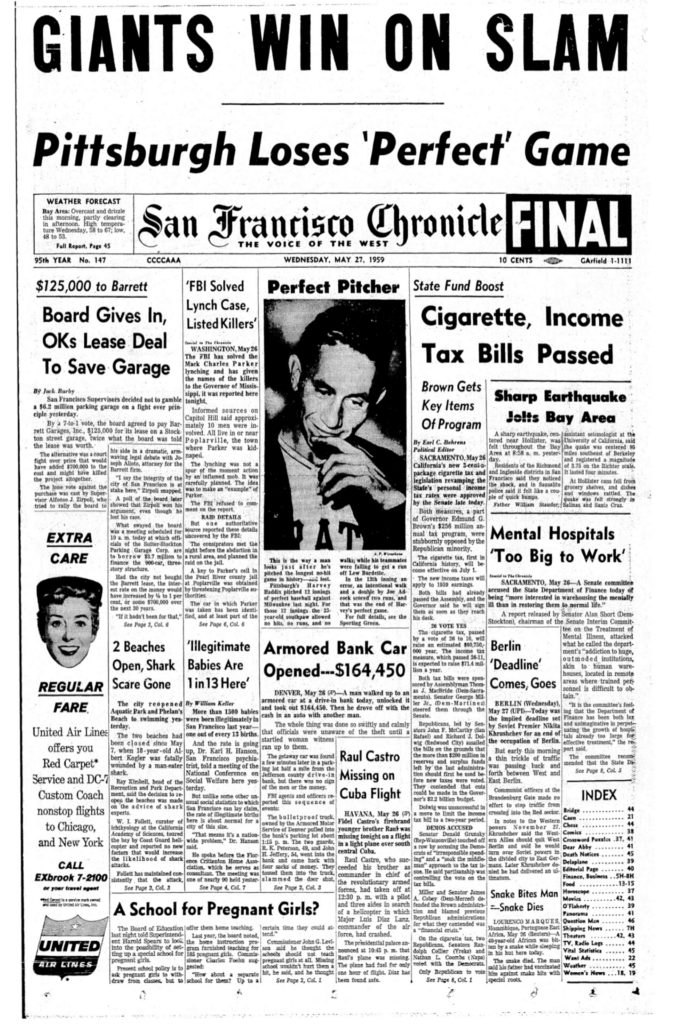 The soon-to-be pitching superstar Sandy Koufax started for the Dodgers. The 23 year-old, wild as a March hare, Koufax entered the game with an unsightly 10.29 ERA. After starting the season in the starting rotation Sandy was relegated to the bullpen in May after not going more than three innings in his four starts. This game was his reentry in the starting rotation.

The Giants skipper Bill Rigney sent diminutive Stu Miller to the hill. The usual junkball relief ace was making his second start of the season, both against the Dodgers.

The Giants jumped up 1-0 in the first when after two were down Willie Mays drew a walk. Orlando Cepeda followed with a groundball to third base. Dodgers third sacker Dick Gray threw it away and the incomparable Mays raced all the way from first to score.

The Dodgers knotted it up immediately in the second when Don Demeter scorched a lead off triple. Brooklyn Dodgers legend Gil Hodges tallied Demeter with a groundball to short.

Miller and Koufax matched zeros until the top of the sixth. After one was retired, Koufax got it started with his second career extra base hit, a double. With two down the tie was broken when Charlie Neal grounded a double past Cepeda at first. Constant Giants nemesis Wally Moon singled up the middle and Neal scored. Moon stole second and Demeter walked to keep Miller in hot water. Hodges lined a single to left to score Moon. But Hodges was shot down by strong-armed Jackie Brandt trying to stretch it into a double. The slick fielding Brandt would capture his lone Gold Glove that season.

The Giants got one back immediately when shortstop Andre Rodgers led off the bottom of the frame with a homer off Koufax.  It remained a Dodgers lead of 4-2 into the dramatic bottom of the ninth. One noteworthy tidbit was the notoriously bad hitting Koufax getting his second double of the game off Gordon Jones leading off the eighth. Sandy would hit .097 over his career!

The Giants ninth began with Koufax chalking up his 11th strikeout of Cepeda leading off. Then Koufax’s wildness that had plagued him his entire career up to then had it’s reemergence when he walked Jackie Brandt. Felipe Alou took a strike then popped up a foul behind home plate. Los Angeles catcher Joe Pignatano raced close to the backstop, got his catcher’s mitt on it and dropped it. Given a second life, Felipe fisted a blooper into left. Koufax’s night ended when Daryl Spencer battled to walk on a 3-2 pitch. It had been perhaps his best start to that point of his wildness-plagued  career.

Fowler started off with a well placed fastball on the low outside corner for strike one. Wagner would later say in the clubhouse that Fowler had struck him out on strictly fastballs earlier in the season. He expected another heater and he got it. But, this time it was low and inside, just where Leon liked it. “Daddy Wags” uncoiled and walloped a line drive into the night far beyond the  right center fence! Pandemonium reigned in Seals Stadium! The rented seat cushions rained down on the field as Wagner took his sweet victory lap around the bags!

In the clubhouse Wagner claimed he thought only two men were onboard. It was only in the clubhouse when a teammate congratulated him on his grand slammer that he realized he’d hit his first career grand slam. Leon debuted with the original San Francisco Giants team in 1958. 1959 was his final season as a Giant. He was traded with Daryl Spencer to the Cardinals in return for Don Blasingame in December. The Giants had an embarrassment of riches in the outfield and the powerful Wagner couldn’t crack the starting lineup. “Daddy Wags” went on to have a very good career hitting 211 home runs and being an All Star three times.

Koufax of course went on to become the greatest pitcher I personally ever saw in the early 1960’s. Later that season, in one of the first games I remember watching on TV, he struck out, a then MLB record-tying, 18 Giants in Los Angeles. His phenomenal pitching from 1962 until his premature retirement due to his arthritic left arm after the 1966 season was perhaps the greatest run of pitching in baseball history given the era!

The Dodgers would go on to win the World Series that October. The Giants would begin a long running streak of heartbreaking seasons when they blew a lead with a horrible stretch run!  They ended the 1959 campaign by losing 7 of their last 8 games to finish 3 back of the Dodgers and Braves!

Haddix, known as “Kitten”,  lost the perfecto and the game in the 13th. First, the perfect game was lost when Pirates third baseman Don Hoak threw away a groundball to allow the leadoff hitter, Felix Mantilla, to reach first base.  Slugger Eddie Mathews, he of 512 home runs fame and the current NL HR leader with 14, did something that would NEVER happen in today’s baseball … he bunted to move the runner to second! Henry Aaron, who was hitting an ungodly .453 entering the game, was promptly walked  intentionally.

The ending was totally bizarre, follow along ball fans!  Big 6’4″ powerful Joe Adcock, who would slam 336 career homers, stepped up to the plate. Joe took the first pitch from Haddix for a ball. The next offering from the tiring lefty was a hanging slider. Adcock blasted the “hang it bang it” mistake over the right center 394 feet marker into the stands for an apparent 3-run walk-off home run.

Aaron, thinking the ball hadn’t left the field, stopped running between second and third and headed for the dugout seeing Mantilla had scored the winning run. Adcock savoring his homer rounded the bases head down. In the confusion he passed Aaron on the bases!

Umpire crew chief Frank Dascoli initially ruled Adcock out but allowed Aaron to score after Henry, I’m sure sheepishly, went back to touch third and crossed the plate for a 2-0 final. Later NL president Warren Giles ruled only Mantilla scored because it was a double. So the final score was 1-0 in one of the most amazing and bizarre games in baseball history! Oh by the way, Lew Burdette scattered 12 hits over 13 shutout innings to get the W.

It was only the seventh time in baseball history a pitcher had been perfect for nine innings. The previous perfect game was Don Larsen’s in the 1956 World Series against the Brooklyn Dodgers.