Though this blog is primarily baseball oriented, I thought a football piece would be appropriate given the excitement caused by our Niners amazing season. I would really appreciate your opinion on this post in the comments section. To comment please create a user ID if you haven’t already. MavoBooks will NEVER share your email address or other personal information!

That Niners victory in Seattle a few Sunday nights ago was high-drama indeed! It was extreme anxiety for the Forty Niners Faithful as the amazing Russell Wilson drove his Seahawks to what appeared to be a certain last-second victory over our Niners. But, like a superhero, Dre Greenlaw made a phenomenal clutch tackle inches short of the goal line on fourth down. Greenlaw’s tackle took me back instantly to January 24, 1982 at the Pontiac Silverdome and linebacker Dan Bunz’s touchdown saving tackle on Charles Alexander on the 1 yard-line to help the Niners make a dramatic goal line stand in Super Bowl XVI, our Niners first Super Bowl win.  In an amazing coincidence both Bunz and Greenlaw wear number 57!! 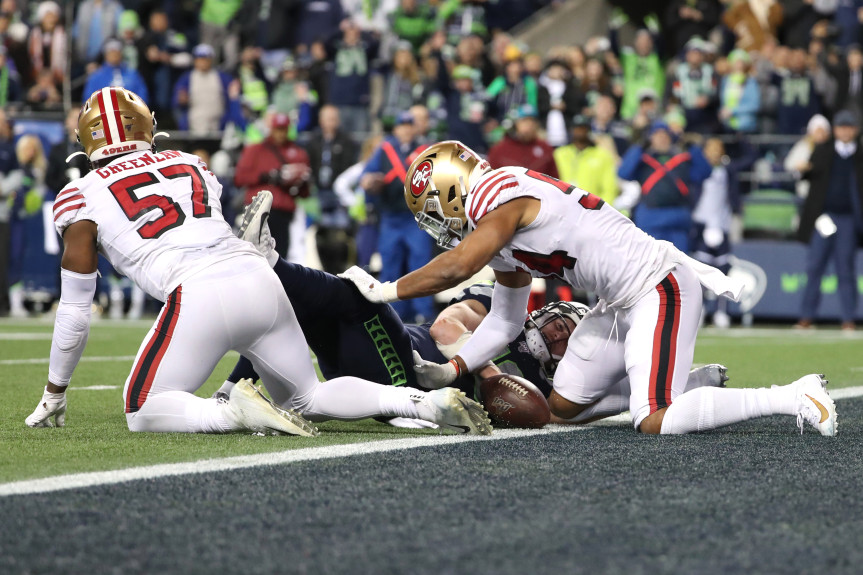 A Seahawks win would have changed the 49ers path to the Super Bowl drastically. That would have dropped the 49ers to the NFC fifth seed and had them playing Philadelphia last Sunday. With their inches-to-spare victory the Niners got a much needed bye to heal up and the NFC road to Super Bowl LIV in Miami now goes through Levi’s Stadium in Santa Clara. The first obstacle on that path to Miami is the Minnesota Vikings, coming in to take on the 49ers on Saturday. More on the Vikings later.

The 49ers were already assured a spot in the playoffs before they traveled to Seattle to take on the Seahawks. Such was NOT the case on December 16, 1972 when the Niners took on the powerful Minnesota Vikings (them again!) at The Stick. That December the 49ers were locked in a three-way fight for the NFC West title with the Los Angeles Rams and Atlanta Falcons. They needed a victory to lockup their third straight NFC West title and a trip to the playoffs. Let me review that 1972 final regular season game and you’ll, hopefully, understand why I feel that 1972 game is the most important regular season victory in Niners history.

Backup quarterback Steve Spurrier had led the 49ers for two months after starting quarterback John Brodie severed a badly sprained ankle on October 15th in a loss to the New York Giants. At the time of Brodie’s injury it was widely felt the 49ers season was over and they would not capture their third straight NFC West title.

Former 1966 Heisman Award winner, Spurrier, had rarely played quarterback during his previous five seasons with the Niners. He had served primarily as the 49ers punter from 1967 through 1970. His starts at quarterback numbered merely six games when he trotted onto the field to replace Brodie on October 15th. However, to everyone’s surprise, including mine, he performed well replacing Brodie and kept the 49ers in contention in the division. He didn’t have a great arm and his passes looked more like wounded ducks rather than beautiful Joe Namath spirals. He was definitely in the Joe Kapp or Billy Kilmer mold (football fans my age will understand this). But, somehow he got the job done, just as Kapp and Kilmer did.

On Saturday December 16th the 49ers needed a win over the Hall of Fame member Fran Tarkenton led Minnesota Vikings to guarantee their third consecutive trip to the playoffs. Lose and the Niners would need losses by the Rams and Falcons to gain a playoff berth. Back then there was only one NFC Wild Card team in the playoffs and the Dallas Cowboys had that spot locked up.

Their opponent that day were the Minnesota Vikings defense of Purple People Eaters fame. The nickname came from a popular song in 1958 and referred to the fearsome Vikings defensive line. That front four was led by Hall of Famers defensive tackle Alan Page and defensive end Carl Eller. Page was recently named to the NFL 100 All Time team. Multiple-time Pro Bowlers Jim Marshall and Gary Larsen rounded out the front four. Their motto was “Meet at the quarterback!”

That Saturday afternoon Spurrier performed badly as the 49ers fell behind by 11 points to the Vikes. He had thrown for a paltry 76 yards, no touchdowns and had been picked off three times.

Niners head coach Dick Nolan decided Spurrier was not up for any comeback heroics when with less than two minutes left in the 3rd quarter Vikes wide receiver John Gilliam out-wrestled 49ers Hall of Fame cornerback Jimmy Johnson for a 31-yard TD pass from Fran Tarkenton. John Brodie, known as JB to The Faithful, trotted out to the roaring from the 61,214 sellout crowd with the score 17-6 Vikings.

Things started off badly for JB. He was rusty and threw two interceptions before he caught fire. Brodie completed 10 of 15 passes for 165 yards. His two touchdown passes in the fourth quarter salvaged the 49ers 1972 season. All-Pro wide receiver Gene Washington hauled in a 24 yard TD from Brodie with a little less than 7 minutes remaining in the game. His final winning TD pass  was 2 yards to Dick Witcher within only 25 ticks left!

In those days the NFL, much to fans disgust, blacked out the TV broadcast in the local area. The rule was that any TV station within 75 miles of the home team’s stadium could not broadcast the game on TV. Because of the TV blackout my father-in-law, brother-in-law and I listened to KSFO’s radio broadcast by Lon Simmons and former 49ers receiver/kicker Gordy Soltau. We were all totally psyched, like the crowd at The Stick, when Lon announced Brodie was trotting out to replace Spurrier. When Lon Simmons, who had an amazing set of pipes for radio, excitedly described Brodie’s touchdown toss to Witcher we went insane! It was a very unlikely win given the 49ers 7 turnovers!

By capturing the NFC West the 49ers would host the hated Dallas Cowboys at Candlestick Park the following Saturday afternoon, December 23rd. The reason for the hatred of the Cowboys was the fact that they had denied the 49ers a Super Bowl berth by beating the 49ers in the last two NFC conference title games. That Cowboys hatred would be intensified the following Saturday!

Saturday, December 23rd 1972 most assuredly has to rank as the darkest day in Bay Area football. Having spent my late childhood in Fremont, the Oakland Raiders were my second favorite pro football team. A few Raiders lived in Fremont and I’d met a few of them, notably the Hall of Fame and NFL ALL Time 100 member, center Jim Otto. 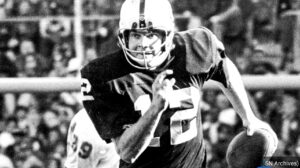 The NFL postseason began with the Raiders playing the Pittsburgh Steelers in Pittsburgh. That was the famous, or infamous depending on your loyalties, “Immaculate Reception” game! The Raiders were leading 7-6 on the strength of a Kenny Stabler, playing in his first playoff game in relief of Daryle Lamonica, 30 yard touchdown scramble with 1:13 left in the game.  With 6 seconds left in the game on fourth down and ten Terry Bradshaw, after nearly being sacked, heaved a pass downfield towards running back Frenchy Fuqua. Raiders free safety Jack Tatum hit Fuqua and the pass bounced off crazily. It appeared the Raiders had won!

My father, three brothers, two sisters, my wife and I watched in horror as Franco Harris plucked the deflected pass inches from the ground, supposedly, and scored on the final play to beat the Raiders!  Still in shock over how the Raiders had lost on such a bizarre crazy final play, we tuned in to KSFO to listen to the Niners take on the Cow – Pies … er boys at The Stick.

My family’s mood brightened considerably when 49ers running back/kick returner Vic Washington returned the opening kickoff 97 yards for a touchdown! The Niners seemed to have the game safely in hand when fullback Larry Schreiber plunged into the end zone to push the 49ers lead to 28-13 five minutes remaining in the third quarter.

However, like Brodie the preceding Saturday, Cowboys Hall of Famer and NFL All Time 100 member, Roger Staubach, replaced an ineffective Craig Morton late in the third quarter with his team desperately behind. Staubach had not started a game all season and had only thrown 20 passes when he replaced Morton. Things didn’t start well for Roger. The 49ers withering pass rush, led by stellar defensive ends Tommy Hart and Cedrick Hardman, sacked Staubach four times before he got it going.

Staubach drove the Cowboys into field goal range and with 8:58 left Tony Fritsch cut the Niners lead to 28-16 with his 27 yard field goal, his third of the contest. “Roger the Dodger” (Staubach’s nickname) got the ball back on his 45 with 1:53 left on the clock. The Candlestick crowd was screaming “DEE-FENSE DEE-FENSE DEE-FENSE” as Staubach drove the Cowboys towards the 49ers goal line. It only took 23 seconds for Staubach to complete the drive by throwing a 20 yard touchdown pass to Billy Parks. Parks beat 49ers cornerback Bruce Taylor on a post pattern. The score was 49ers 28 cowboys 23 and the clock read 1:30 remaining when the extra point was tacked on

All the Niners had to do to erase two years of being denied the Super Bowl in the NFC title game by the Cowboys was field the certain onside kick coming from Dallas and run out the clock. Naturally, on this darkest day in Bay Area football that didn’t happen!

Head coach Dick Nolan sent out the Niners “hands team” to ensure his team fielded the onside kick that was surely coming. But, Fritsch’s kick took a crazy hop on the Astroturf, installed in 1971 with the 49ers move to Candlestick, bounced off wide receiver Preston Riley’s chest and was recovered by Dallas cornerback Mel Renfro at the 50.

Staubach quickly drove the Cowboys to the winning TD. The drive was capped with a 10 yard touchdown pass to Ron Sellers.  There was 52 seconds left when Brodie got the ball back. His frantic try to get the 49ers into field goal range was thwarted by a critical holding call on right tackle Cas Banaszek. When the gun went off, the NFL used starter guns to signal the end of each quarter up to 1993, it was an all too familiar way to end the Niners season – with another Dallas knockout! Distraught, I had to walk to the park near my parents’ home to mourn my two favorite football teams losing in such dramatic fashion three hours apart!  The fact that for three straight seasons the Dallas Cowboys knocked my Niners out of the Super Bowl derby still annoys me – a lot!

So that is how John Brodie pulled out what I consider the most important regular season victory in 49ers history. To complete my recap of the 1972 NFL playoffs, the Cowboys were denied their third straight Super Bowl appearance by their hated rivals, the Washington Redskins a week later. The Redskins were beaten in Super Bowl VII 14-7 by the “perfect” 17-0 Miami Dolphins.

This Saturday the 49ers take on those Minnesota Vikings that John Brodie had beaten 48 years ago. This is the sixth time the 49ers have played the Vikings in the divisional playoff. The Niners hold a 4-1 advantage over the Vikings in the playoffs. But, that lone loss worries me tremendously! 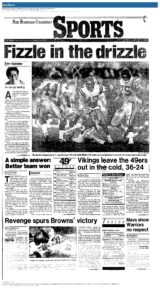 In 1988, 32 years ago, the situation was frighteningly similar! On Sunday, January 3, 1988 the Vikings traveled to New Orleans in the Superdome  and upset a heavily favored Saints team 44-10. The Vikings then headed to San Francisco on a short week and upset the number one seed, favored by 11 Niners 36-24 on Saturday, January 9th! That loss totally shocked The 49ers Faithful! That 49ers team had finished the year with the best record in the NFL with a 13-2 record in a strike shortened season. The Niners Nation was planning on traveling to San Diego for Super Bowl XXII, Lizzy and I included. Let’s hope history doesn’t repeat and our Niners can beat the Vikings.

9 thoughts on “Most Important 49ers Regular Season Win … Not So Fast!”