Yesterday was the 50th anniversary of Willie Mays’s 600th home run.  I posted this a day late.

Things were much different 50 years ago on this date in 1969! Currently, the Giants are playing out the string in Bruce Bochy’s final week as their manager, while the young talented Braves are heading to the postseason. Back in 1969 these same two teams were locked in a tense fight to capture the first National League West Division title.

It was a clutch home run in a 2-2 tie game in the top of the seventh inning, in a game the Giants desperately needed.  Mays was not expected to play in the contest because of an injured left leg. But, with the Giants needing to win to maintain their slim ½ game lead over Atlanta, the Giants captain answered new manager Clyde King’s call. Willie was pinch-hitting for newly called up rookie George Foster. Foster had entered the game in the sixth as a defensive replacement, for Jim Ray Hart. “We didn’t want to put too much pressure on the ‘kid'”, Mays said afterwards.

Ron Hunt had led off the inning with a single and was on first as Mays strode to the plate. Willie laced the first pitch from Corkins, a fast ball, in a high arc over the left center 370 feet marker. The ball ended up an estimated 391 feet from home plate.

The stands where baseball touched down were empty, except for 15 year-old Al Forlander of Carlsbad, who retrieved the historic baseball. But, in a sign of the times, Padres ushers wrestled the ball away from the teenager and gave it to third base coach Ozzie Virgil. “It was real exciting.  But they got it away from me and gave me another ball.”, young Forlander said. 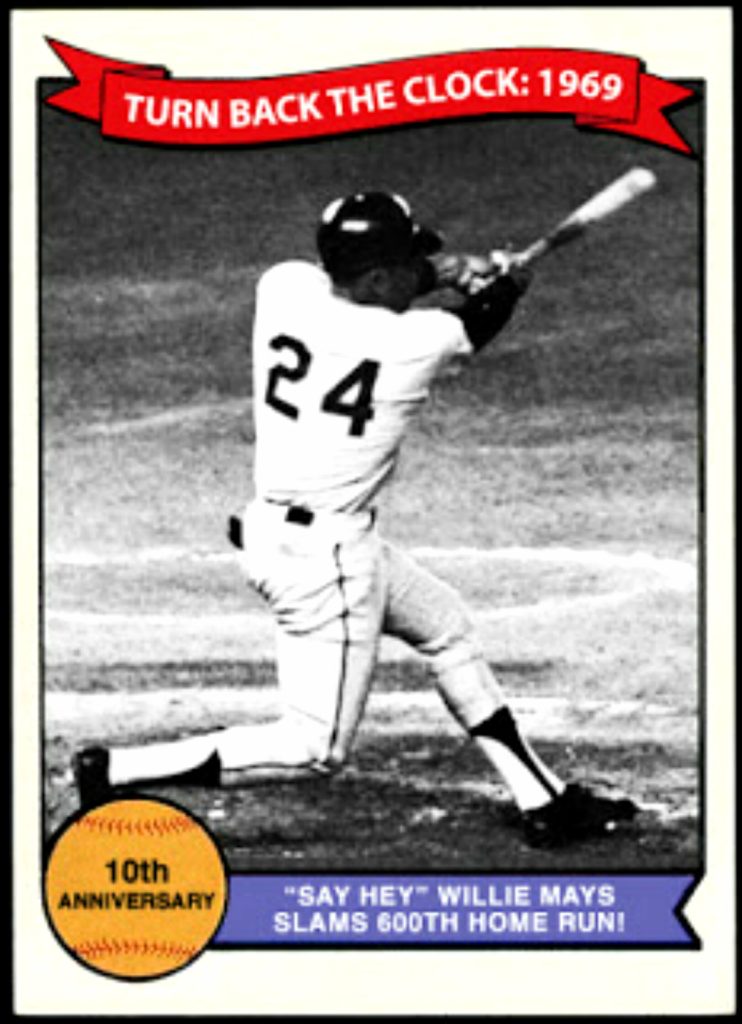 As Willie limped slowly around the bags all the Giants poured out of the dugout to greet the great man at the plate. The one hundred or so Giants fans that had made the journey to San Diego whooped it up behind the Giants dugout. The sparse crowd of 4,779 stood and cheered wildly for five minutes breaking into a, “We want Willie! We want Willie!”, chant towards the end until Mays emerged from the dugout and tipped his cap.

Between innings former MLB player Frank Torre, representing Willie’s bat manufacturer the Adirondack Bat Company, presented Mays a huge trophy at home plate to commemorate his achievement. Later, Mays received from his bat company one share of Adirondack stock for every 391 feet his homer travelled plus a sports car.

The Giants won by that 4-2 score to maintain their narrowest of margins over the Braves. After the game Mays remarked, “That was my biggest thrill, seeing my teammates there at the plate. There was no one on the bench. I love pressure and like to go up there when we have to get a hit.  But, I’ve been thinking long ball for two or three weeks; this was on my mind and when you think about hitting home runs you usually don’t hit them.” He added, “When I started in this game I had no idea I’d ever hit 600 home runs. I don’t even like records. But, I have to be thrilled with this one and I don’t think I should quit right now.”

Mays indicated that he probably will not last long enough to break Babe Ruth’s home run record of 714, which in 1969 was the record. “There are so many young people coming around,” Willie added, “that I’m just happy to be maybe one of four or five who will hit 600.”

Mays was correct, he would finish his first-ballot Hall of Fame career after the 1973 season with 660 home runs. The 1969 Giants would lose the next two games to the expansion Padres in heartbreaking fashion and five of their last eight games to finish three behind the Braves for the first NL West title.

Watching my idol’s 600th home run was bittersweet for me personally because of the circumstances in which I witnessed it. I saw this amazing milestone home run on TV in my father’s hospital room. He had gone into the hospital two weeks before for “routine” prostate surgery. Something went horribly wrong during the surgery and he wound up paralyzed from the chest down and would never walk again!

However, Willie’s home run did bring a smile to my father’s lips for the first time in weeks. He reminisced about taking me to my first MLB game with my grandfather at Seals Stadium in April 1958. It was at that game that I fell in love with Willie and baseball, as described in the preface of my book, Falling in Love With Baseball (which you can buy HERE).