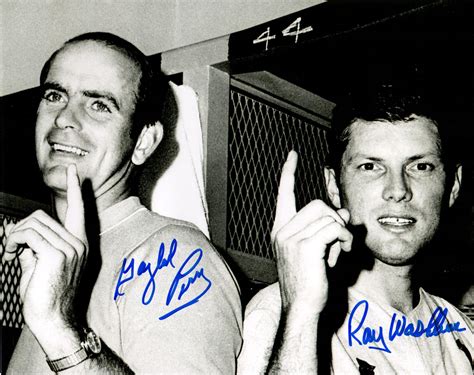 Fifty years ago today two historic games unfolded at Candlestick Park. First, on September 17th the Giants Gaylord Perry no-hit the 1968 NL Champion St Louis Cardinals. I say the NL Champion St Louis Cardinals because two days before the Cardinals had eliminated the 2nd place Giants in the 1968 NL pennant race. The following afternoon the Cardinals pitcher returned the favor by no-hitting the Giants! The 1968 season was fittingly deemed “The Year of the Pitcher”, but this was unprecedented. Never before or since in MLB had back-to-back no-hitters been traded by opposing teams in a series.  This capstone of pitching dominance as the regular season was winding down perhaps prompted the coming rule changes to help the batters. More on that later. 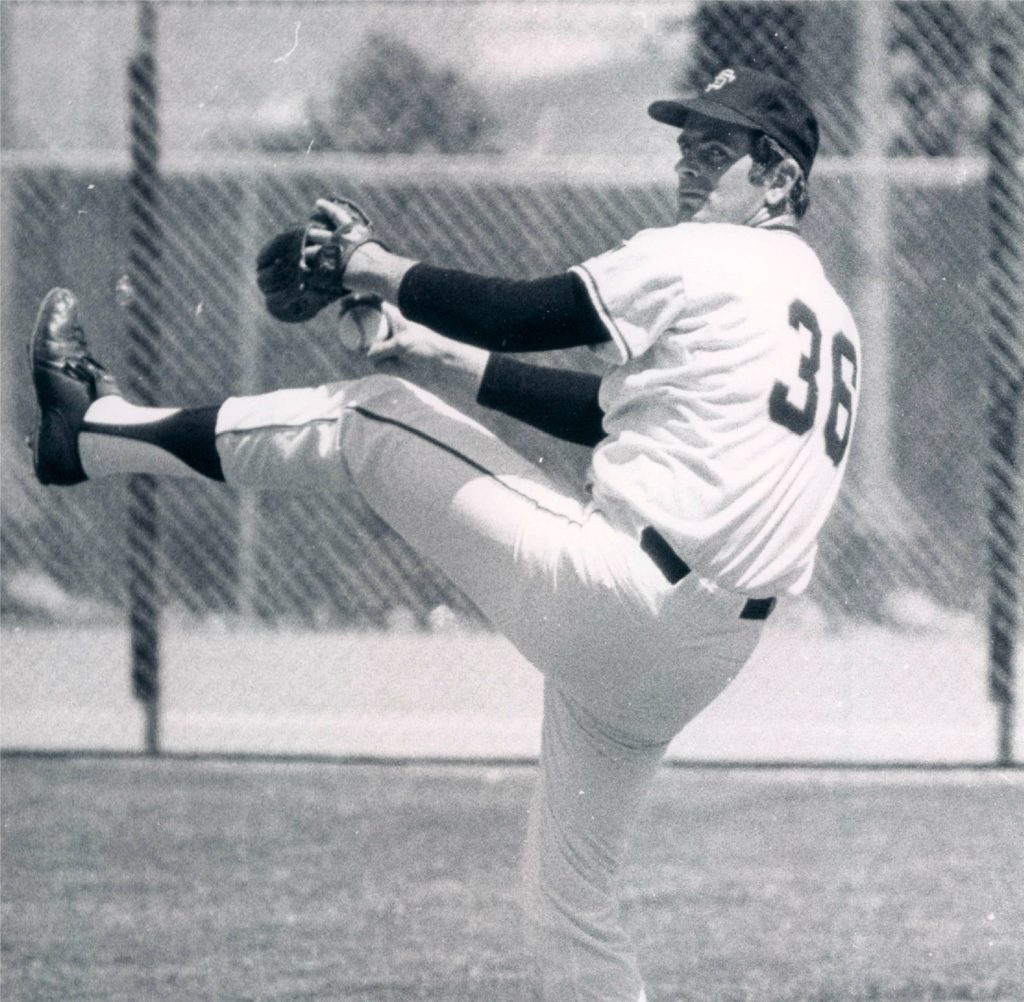 The first no-hitter was a matchup of two future Hall of Fame hurlers; St Louis’s Bob Gibson and San Francisco’s Gaylord Perry. Gibson was finishing off a truly remarkable season on the mound. His final ERA was a microscopic 1.12!  His record was 22-9 with the Cardinals scoring a mere 12 runs in his 9 losses. “Gibby” fired 13 shutouts that season, including 5 in a row. Surprisingly, three of Gibson’s losses were to the Giants. 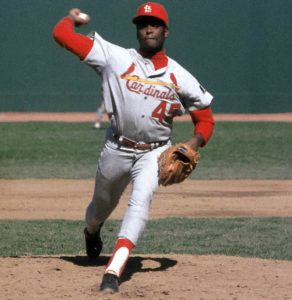 Gaylord Perry was also enjoying a fine season in 1968, although not the historic season Gibson was having. He finished the season with an excellent ERA of 2.45 with a barely winning record of 16-15. Perry was the victim of scant run support all year, as many pitchers were victimized that “Year of the Pitcher.”

Here’s a few interesting facts about that first no-hitter on that Tuesday night. Only 9,546 fans were on hand at “The Stick” to witness the second no-hitter in the eleven year history of the San Francisco Giants. Giants Hall of Famer Juan “The Dominican Dandy” Marichal had thrown the first San Francisco no-no five years earlier in 1963. It was the first time the Redbirds had been no-hit since Don Cardwell of the Chicago Cubs had turned the trick on May 15th 1960.

True to form in “The Year of the Pitcher”, the final score of Perry’s no-hitter was 1-0. That was the identical score of Marichal’s no-no in 1963 when he held the Houston Colt 45’s hitless. If your thinking one of the Giants big sluggers like Mays, McCovey, Hart or rookie Bobby Bonds hit a bomb to win it … you’d be wrong! Shockingly it was light-hitting, hit-by-pitch artist Ron Hunt who hit a home run over the left field fence off the fearsome Bob Gibson! It was only the Giants second baseman’s second homer of the year. He would only circle the bags 39 times in his 12 year MLB career. Hunt had come over from the Giants arch rivals Dodgers with Nate Oliver in the trade that sent Tom Haller and an obscure long-forgotten minor leaguer by the name of Francis Kasheta shortly before the season. It was a rare time the hated rivals traded with each other. To prove I was not using hyperbole to describe Ron Hunt as a ‘hit-by-pitch artist’, 1968 was his first year of seven consecutive seasons he led the NL in being hit! He was very adept at turning his shoulder into a pitch to just let it graze him. 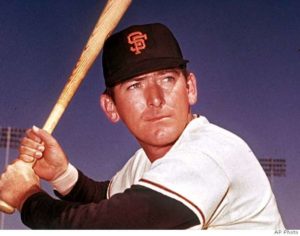 The catcher for Perry’s no-hitter was Dick “Mule” Dietz who had taken over the catching duties, along with Jack Hiatt, from Haller. Earlier in the season Dietz had been involved in, what I consider, the most egregious decision by an umpire in the history of baseball!  In a game at Dodgers Stadium in the ninth inning with the bases loaded and Dodgers pitcher Don Drysdale on the verge of setting the modern day MLB record for consecutive scoreless innings Dietz was plunked by a high inside offering by Drysdale. It appeared that Drysdale’s pursuit of the scoreless innings record was over. But, in a call that I still find completely unfathomable, home plate umpire Harry Wendelstedt decided Dietz had made no effort to avoid being hit by the pitch and called it a ball! After that horrendous blatant hometown call by Wendelstedt the Giants failed to score and Drysdale went on to set the record for consecutive scoreless innings. Dietz had not pulled a “Ron Hunt” and turned his shoulder to let Drysdale’s pitch graze him. He had thrown his arm up to avoid getting hit in the neck. The home plate umpire for Gaylord’s no-hitter … yep, you guessed it, that same Harry Wendelstedt!

(To read how 9 years later I came very close to getting thrown out of Candlestick Park by Wendelstedt see chapter 16 Businessman’s Special in my book Falling in Love With Baseball. To buy a copy go to MavoBooks.com/shop.)

Perry walked two and only faced 29 Cardinals in his masterpiece. One of those 29 Cardinals was an old teammate, Orlando Cepeda, who was celebrating his 31st birthday that night by going 0 for 3 with two strikeouts against Gaylord. There were only two balls that reached the outfield. Both were to the Giants center fielder Bobby Bonds. Thirty seven year-old Willie Mays had the night off. It would be Perry’s lone no-hitter in his illustrious 22 year Hall of Fame 314 win career. However, Gaylord would go on to win two Cy Young awards, one in each league.  He was the first to accomplish that difficult distinction.

On a personal note, I listened to the game broadcast on KSFO by Hall of Fame Giants broadcasters Russ Hodges and Lon Simmons. About the 7th inning I suspected this could be a no-hitter by Gaylord. Remembering something got up to retrieve something. My uncle was serving in the US Air Force in Okinawa Japan at that time. Because international calls were very expensive, he’d sent a small reel-to-reel Sony tape recorder to my grandfather to correspond with him by audio tape. My grandfather had let me borrow his Sony tape recorder to use on a school project. It was sitting on my table in my bedroom! That was how, by moving the microphone close to my radio, I was able to record the final two innings of Gaylord Perry’s no-hitter that night.  So what happened to that tape?? It was thrown away along with all my baseball pictures, awards and trophies a few years later by my other uncle!! I damn near killed him when I found out! Only my, bigger than me, “little” brother prevented a ugly family incident by stepping between us. How I’d LOVE to have that tape on this 50th anniversary of that no-hitter, not to mention my baseball pictures, awards and trophies. 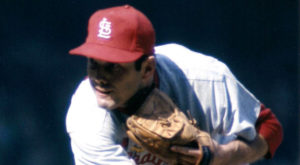 The next day was truly the historic game when Cardinals pitcher Ray Washburn “returned serve” by no-hitting the Giants. While it wasn’t the Hall of Fame pitching matchup of the previous night, it was a matchup of Washburn vs Bobby Bolin of the Giants, both having career years. In fact, the hard throwing Bolin would end the season with an ERA of 1.99 which remains the lowest qualifying ERA of a Giants pitcher in their San Francisco history. 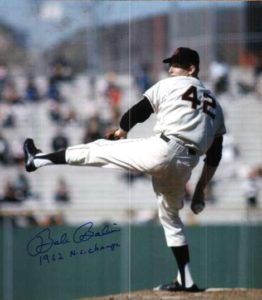 Washburn had come up in 1961 as a highly touted prospect. However, a shoulder injury to his pitching arm in 1963 held him back.  He worked hard to rehab his shoulder and in 1968 he appeared ready to fulfil his potential. But, two years later he was out of baseball when his shoulder problem recurred.

His no-hitter wasn’t as tidy as Perry’s had been. Ray walked 5 and fanned 8. Washburn had only a few scares during his gem. The most difficult play he made himself. In the sixth inning rookie Bobby Bonds hit a hard comebacker that hit Washburn in the leg squarely. But when the ball dropped at his feet he was able to throw the speedy Bonds out.

Then with two outs in the 9th inning with the no-hitter tantalizingly close he had to face the most feared hitter in baseball, Willie “Stretch” McCovey.  McCovey would lead the NL in 1968 with 36 homers. “Stretch” hit a screaming line drive on an inside pitch …foul! On the next pitch Willie Mac hit a high fly to deep centerfield where Gold Glove Curt Flood corralled it to finish the no-hitter.

Like Perry hours before Washburn only allowed two balls to reach his outfielders.  The aforementioned flyball by McCovey to finish the game and a flyball to Lou Brock in left by Hal Lanier in the 6th. Willie Mays was quoted after the game, “Man, Ray’s curve was really falling off the table and he got it over even when he was behind in the count.”

A paltry crowd of only 4,703 were on hand at Candlestick Park to witness baseball history. Only one other time had there been no-hitters thrown on consecutive days. That was in 1917 on May 5th & 6th when Ernest Koob and Bob Groom of the St. Louis Browns turned the trick against the Chicago White Sox. But, Groom’s came in the second game of a doubleheader so there was a game between the no-hitters. 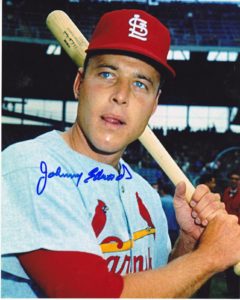 Washburn’s catcher was Johnny Edwards and it was the third “no-hitter” he had caught. Why the quotes around no-hitter? In 1965 Edwards was behind the dish when fireballing Jim Maloney of the Cincinnati Reds threw two “no-hitters!” On June 14th Maloney held the New York Mets hitless for 10 innings while striking out 18! In the 11th he lost his “no-hitter”, his shutout and the game when Johnny Lewis hit one out of Crosley Field. Two months later on August 19th Maloney got his official no-hitter at Wrigley Field when he stifled the Cubs for 10 innings. It was a untidy no-hitter though because he walked 10! In both games Johnny Edwards was the catcher.

I didn’t get the chance to record the end of the second no-hitter because the game was over by the time I got home from high school. But, I recall vividly my grandfather, who had let me borrow his tape recorder, excitedly telling me about the historic back-to-back no-no’s as soon as I walked in the door.

Just a few more tidbits about the back-to-back no-hitters.

Washburn’s no-no was only the 4th in the long history/of the St Louis Cardinals and the first in 27 years since Lon Warnecke in 1941. The other two Cardinals with no-hitters, Jesse Haines In 1924 and  Paul Dean (brother of Dizzy Dean) in 1934.

It was the 3rd time the Giants had been held hitless in San Francisco. Others to turn the trick, Warren Spahn in 1961 and Sandy Koufax in 1963.  In the long history of the Giants in New York and San Francisco it was the 10th time they’d been no-hit. 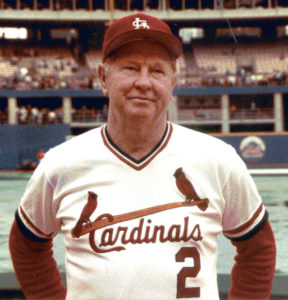 Perry’s and Washburn’s were the only no-hitters Cardinals manager Red Schoendienst had ever witnessed.

The time between the final outs of the no-hitters was less than 18 hours. Perry’s lasted a speedy 1 hour 40 minutes and Washburn’s 2 hours 19 minutes.

Giants catcher Dick Dietz, who caught Perry’s masterpiece, celebrated his 27th birthday the next day by going 0 for 2 with a strikeout and walk against Washburn. He also nailed two Cardinals trying to steal second base, Flood in the 1st and Cepeda in the 2nd.

Both pitchers were 30 years old when they threw their historic no-nos with Perry celebrating his 30th 2 days before his no-hitter.

After the “Year of the Pitcher” in 1968 baseball instituted changes designed to boost offense. The pitcher’s mound was lowered from 15 inches in height to 10 inches high. The strike zone was shrunk to be from the armpit to the knees from the earlier shoulders to the knees. Umpires were instructed to be more vigilant about doctored baseballs. In 1969 runs per game jumped from 6.84 to 8.14. 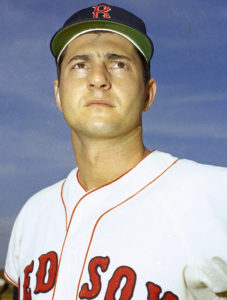 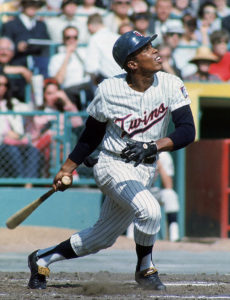 In 1969 MLB expanded by 4 teams adding: San Diego and Montreal in the NL and Seattle Pilots and Kansas City Royals in the AL.  Divisional play began, ending balanced schedules and pure league wide pennant races in 1969.

I’ve often wondered how much those two back-to-back no-hitters at “The Stick” figured into the decision to the rule changes to boost offense. Perhaps it was the proverbial “straw that broke the camel’s back” moment coming as it did so late in the 1968 season! 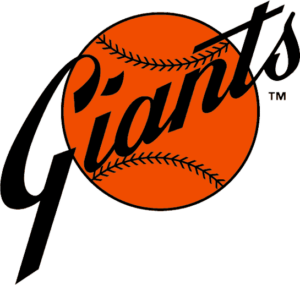