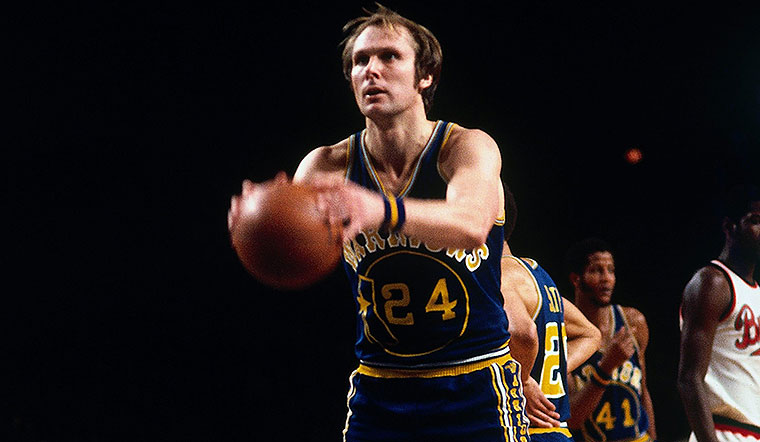 This blog is usually exclusively baseball related. But, I felt with the Giants playing such disappointing ball so far, I thought I’d give some love to our soon to be NBA champion Golden State Warriors. I’m not a huge basketball fan or aficionado. I followed the hoops more closely decades ago when the phenomenal Bill King did the play-by-play.

In September 1974 I started my first full-time tech job as a computer operator at United Grocers (UG) in Oakland. Our offices were directly across the Nimitz freeway from the Coliseum complex on Edgewater  Drive. Fortuitously I started just as the Oakland A’s were wrapping up their third straight World Championship. It’s surprising that those 1974 A’s are the last Bay Area team to clinch a championship on their home turf!  I drought who we expect the Dubs to end tonight!

I worked on swing shift from 4 pm to 12 midnight. We got special permission to bring in a TV into the computer room to watch the Fall Classic on. To get reception our supervisor had to run about 75 feet of antenna wire outside the hermetically sealed computer room. No internet TV or cell phones then!

When the A’s wrapped up their victory in game 5 I was on my lunch and got to go outside to see the fireworks at the Coliseum less than a good Jack Nicklaus drive away! I was cleaning close enough to hear the crowd cheering the champions!

As the victory celebration began for the A’s nobody paid too much attention to the season opening game of the Golden State Warriors in L.A. the very next day! The Warriors has finished barely above .500 and missed the playoffs the previous season. Nobody considered them a serious threat to the John Havlicek led NBA champion Boston Celtics.

Yet, I took notice when beginning in the 2nd week of the new season they ran off six straight wins. The Warriors had two fine rookies Keith (later Jamal) Wilks out of UCLA and Phil Smith from USF. They were led on the court by Hall of Famer Rick Barry and on the sidelines by Al Attles. Coach Attles had the deepest basso profundo voice I’ve ever heard.

During my first few weeks at UG I befriended a very friendly security guard. He was an older African-American gentleman that always greeted me warmly when I passed through the lobby on my way into the office. After a month I’d eat my sandwich on my lunch break in the lobby while he regaled me with stories. To read about how I had a frightening meeting with heavyweight champion George Foreman in the lobby pick up my book Falling in Love With Baseball to read the chapter Tribute to the Champ. (the book is available online at MavoBooks.com/shop to order)

Around November or so my supervisor called me to the phone. I initially thought something had happened at home. To my surprise it was my friend the security guard. He said he had one Warriors ticket for the game that night if I wanted it.  It was early for my lunch break and the game was starting in a few minutes. My supervisor generously gave his permission to go!

When I got to the lobby my friend told me he had gotten the ticket from a guy in Rick Barry’s agent who had an office in the building. He said I’d like where the seat was! When I looked at the ticket I got excited. It was right behind the Warriors bench!

I hurried to the arena and was just in time for the tipoff. The seat was fabulous! I’d never sat that close to the action.  Seeing how fast these huge gifted athletes moved was a complete revelation!  It was light years from the high school basketball I’d watched.

It was great watching Rick Barry shoot the lights out that night. Barry was a great shooter and played before the NBA instituted the 3-point line! Who knows what he would’ve scored if he had the 3-point shot when he played.

He was already my favorite player. Of course, it helped that he wore my baseball idol’s number 24! Rick had also idolized Willie Mays when growing up in New Jersey. He had the all-time best free throw percentage in NBA history using his unorthodox underhanded technique. It’s a mystery why more poor free throw shooters haven’t copied his underhanded free throws! I guess it’s not macho to do it.

I only had the privilege of that great seat one more time. Everybody knows that gritty Warriors team wound up sweeping the highly favored Washington Bullets in the final. Then exactly 40 years after that gutty Warriors team won the title, the Dubs brought home the trophy from Cleveland.

Back in the 70’s teams that called the Oakland-Alameda Coliseum home claimed championships for five straight years in the three major American sports. From 1972 thru 1974 the A’s won, next that Cinderella Warriors team captured the NBA title in 1975 and after years of frustrating playoff catastrophes the Raiders won the NFL title in 1976. The Coliseum was truly the Valhalla of champions!